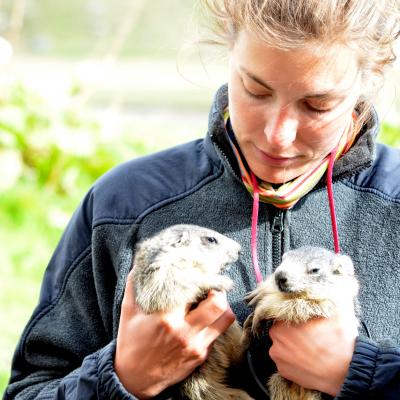 Has been part of 3 CREAF projects

The conservation of biodiversity is a major concern of international governments. While the three levels of biodiversity (ecosystems, species and genes) have long been described, it was not until 2010 that a focus was placed on genetic diversity. Indeed, it represents the true potential of adaptation and evolution of species.

The aim of my PhD (carried out at Laboratoire de Biométrie et Biologie Evolutive, Université Claude Bernard Lyon 1) was to understand the causes and consequences of genetic diversity in natural populations. To do it, I took advantage of a long-term (25 years) capture-mark-recapture program of a wild population of Alpine marmots (Marmota marmota) in La Sassière (Alps).

Since 2015 I have a postdoctoral position in Universitat Autònoma de Barcelona as a teacher in Environmental Biology and Environmental Sciences Bachelor’s degrees and I carry out my research at CREAF, where I take part of a second long-term (10 years) capture-mark-recapture program of a introduced wild population of Alpine marmots in La Cerdanya (Pyrenees). I am particularly interested in understanding the differences between native and introduced populations regarding their population dynamics, population genetics and behaviour.