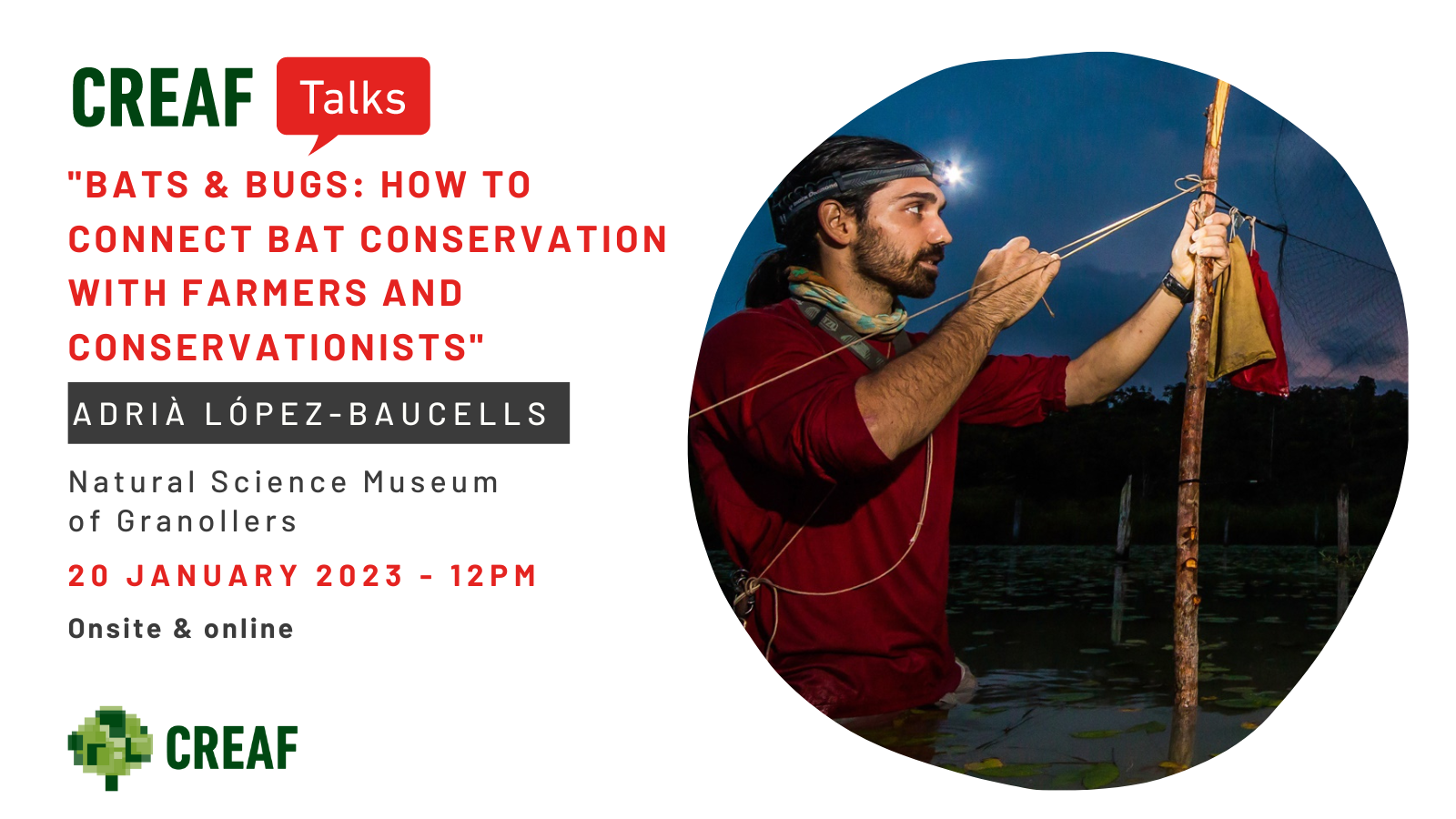 CREAF Talk with Adrià López-Baucells - "Bats and bugs: how to connect bat conservation with farmers and conservationists"

Seminars will combine in-person and online formats (CREAF, Sala Graus II, Universitat Autònoma de Barcelona, Spain) but in all cases, talks will be always streamed (not recorded), so they can be followed online.

HOW TO CONNECT: direct link to Adrià López-Baucells's conference.

SUMMARY OF THE WORKSHOP:

Approximately 10.000 years ago, some human communities left their nomad life to form large sedentary settlements on all continents. This shift involved creating agricultural lands to obtain the necessary food, continuously expanding to maintain growing populations. More than 5,000 million hectares of the terrestrial surface are now used for crops and grazing areas, increasing in more than 1.000 million new hectares within the next 50 years, especially in developing countries. Fighting insect pests has been one of the major challenges in agriculture worldwide, being the biological control or the Integrated Pest Management practices, some respectful and cost-effective ways to prevent and overcome this problem. Bats, among other animals, are well known as essential arthropod predators worldwide and, in the last decades, studies focused on the role of bats as natural controllers of agricultural pests are increasing significantly. Since the 2010s, we have been assessing the state of knowledge about bats’ role as pest controllers at a global level, synthesizing the evidence of this process (quite intensively in the Ebro Delta, but also in central Spain, Madagascar, Mexico and the Mauritius Islands) and compiling recommendations for their future application. During this talk I will discuss the “state-of-the-art” knowledge about bats and agricultural ecosystem services, and most importantly, different ways to approach farmers to enhance bat conservation.

Adrià López-Baucells completed his PhD at the University of Lisbon in 2018. During his doctorate he studied the effects of Amazonian rainforest fragmentation on tropical bats using autonomous ultrasound detectors. His main research interests include the study of habitat connectivity, loss and fragmentation worldwide, all under the umbrella of applied ecology, with special emphasis on the use of technology for conservation. In his projects, he understand the ‘soundscape’ exploration (the landscape of sounds that exist in nature) as a path to promote sustainable land use as well as to protect some of the most severely threatened species and habitats.
He started working with bats at the Natural Science Museum of Granollers in 2005, where he met his first mentors, who rapidly introduced him to the intricate secrets of bats. Since then, he has collaborated on numerous international bat conservation projects shaping his scientific knowledge and background. As a bat researcher, he is especially interested to find applied, clear solutions to the current threats that bats are seriously facing all over the world. After five years of bat research in Europe, in 2010, he concluded his BSc with a final project on bats in Colombia, his first contact with Neotropical species. Afterwards, he jumped to Australia to carry out his MSc thesis studying competitive behavior between flying foxes. And more recently, he has also joined quite a few bat-related expeditions in French Guiana, Brazil, North Africa, Kenya and Madagascar, where he has finally become a National Geographic Explorer.

The assessment of the ecosystem services provided by bats represents now one of his most important types of research, especially with the aim to efficiently connect the society with bat conservation needs worldwide. As a National Geographic Explorer he is now establishing a new project based in Madagascar, a country that is totally dependent of subsistence rice agriculture, with big problems of harvest loss, and heavily threatened endemic bat populations due to the vast deforestation.

Home  /  Get involved  /  Agenda  /  CREAF Talk with Adrià López-Baucells - "Bats and bugs: how to connect bat conservation with farmers and conservationists"